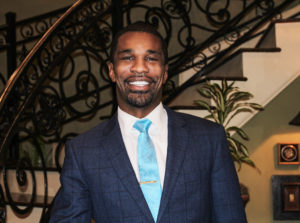 Randall Jerome Gay, Jr., better known as “Blue,” is a former American football cornerback of the National Football League. He was signed by the New England Patriots as an undrafted free agent in 2004. He played college football at LSU and graduated in 2004 with a Bachelor’s degree in Marketing. Gay also played for the New Orleans Saints. He played on a Super Bowl winning team with both the Patriots and the Saints, and is also noted for being one of the two Louisiana-born having won a championship at both the college and pro-level for teams of Louisiana, his home state. After retiring from the NFL in 2010, Randall pursued a law degree from Southern University Law Center and graduated cum laude in 2015.

Other than practicing law, Randall is known as a mentor to many who enjoys giving back to his community and can always be seen at community outreach events. He is the head football coach for the Brusly Panthers Youth Football Team on which he played as a child, and re-established after his retirement from the NFL.